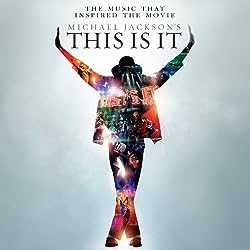 On October 12th, the first new Michael Jackson song to emerge since the world mourned the loss of this musical icon will be released – a brand new single entitled “This Is It.” Soon after, Sony Music Entertainment’s Columbia/Epic Label Group will release the two-disc album This Is It featuring the music that inspired Sony Pictures’ forthcoming film MICHAEL JACKSON’S THIS IS IT. This two-disc album will be available internationally on October 26th and North America on October 27th to coincide with the worldwide release of the motion picture which arrives in theaters on October 28th and runs for a limited two-week engagement.

“This song only defines, once again, what the world already knows – that Michael is one of God’s greatest gifts,” comments John McClain, co-producer of the album.

Disc one will feature the original album masters of some of Michael’s biggest hits arranged in the same sequence as they appear in the film. The disc ends with two versions of the never-released “This Is It.” This song is featured in the film’s closing sequence and includes backing vocals by Michael’s brothers, the Jacksons.

Disc two offers previously unreleased versions of some of the artist’s classic tracks. This disc also features a touching spoken word poem from Michael Jackson entitled “Planet Earth” that has never been heard before.

The two-disc This is It is a stand-alone companion to the motion picture and includes a 36-page, commemorative booklet featuring exclusive photos of Michael from his last rehearsal.

The motion picture MICHAEL JACKSON’S THIS IS IT will offer Jackson fans and music lovers worldwide a rare, behind-the-scenes look at the performer as he developed, created and rehearsed for his sold-out concerts that would have taken place beginning this summer in London’s O2 Arena. Chronicling the months from April through June, 2009, the film is produced with the full support of the Estate of Michael Jackson and drawn from more than one hundred hours of behind-the-scenes footage, featuring Jackson rehearsing a number of his songs for the show. Audiences will be given a chance to discover the man they never knew through this privileged and private look at Jackson. In raw and candid detail, MICHAEL JACKSON’S THIS IS IT captures the singer, dancer, filmmaker, architect, creative genius and great artist at work as he creates and perfects his final show.

Kenny Ortega, who was both Michael Jackson’s creative partner and the director of the stage show is also directing the film, which is being produced by Randy Phillips, Kenny Ortega and Paul Gongaware. Executive producers are John Branca and John McClain. The film will be distributed worldwide by Sony Pictures Releasing.

Tickets for the limited two-week engagement of the film go on sale beginning September 27. For more information about the motion picture, please visit the website www.thisisit-movie.com.