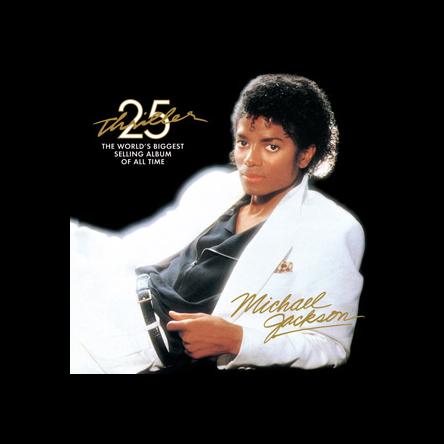 Originally released in the US 25 years ago on November 30, 1982 by Epic Records, Thriller, Michael Jackson’s sixth solo album and second with producer Quincy Jones, rocketed the former child-star lead singer for the Jackson 5 into the stratosphere of international superstardom. Introducing the “robot” and the “moonwalk” into the international lexicon of clubland dance moves via the pulsing sounds of Thriller, Michael Jackson revolutionized all aspects of mainstream pop culture — from radio airwaves to the newly emerging art form of music videos — becoming the world’s most popular entertainer in the process.

The original Thriller spent an astounding 80 consecutive weeks in the American Top 10, 37 of those at #1. Seven of the album’s original nine tracks became Top 10 singles on the Billboard Hot 100 while individual singles from Thriller reached #1 chart positions in the US, the UK, France, Italy, Australia, Denmark, Belgium, South Africa, Spain, Ireland, New Zealand and Canada.

Thriller made history as the first and only record to be America’s top-selling album two years running (1983 and 1984).

Thriller has been certified 33x platinum by the RIAA, giving it Triple Diamond Award status in the US. In addition, the album has achieved Diamond or Multi-Platinum status in Argentina, Australia, Brazil, Belgium, Canada, Finland, France, Germany, Japan, Mexico, Netherlands, New Zealand, Portugal, Spain, Switzerland and the UK. In 1985, the Guinness Book of Records named Thriller the Best Selling Album of All Time, an achievement which remains unsurpassed to this day.

Named the “Most Successful Entertainer of All Time” by the Guinness World Records, Michael Jackson is among the most highly acclaimed and influential artists in pop culture. He was named the World Music Award’s Best-Selling Pop Male Artist of the Millennium and received the American Music Award’s Artist of the Century Award. He has been inducted into the Rock & Roll Hall of Fame twice: in 1997 as a member of the Jackson 5 and as a solo artist in 2001.

The Thriller – 25th Anniversary Edition includes the original album in its entirety as well as eight bonus tracks and a DVD featuring Michael Jackson’s groundbreaking short films from Thriller (“Thriller,” “Beat It,” and “Billie Jean”) and the artist’s Emmy-nominated breakout performance of “Billie Jean” from the legendary “Motown 25: Yesterday, Today, Forever” television special (first broadcast on NBC on May 16, 1983).

The expanded version of Thriller premieres five tracks previously unreleased in any form: a new Kanye West remix of “Billie Jean”; a new 2008 version of “Wanna Be Startin’ Somethin'” with Akon and will.i.am; will.i.am remixes of “The Girl Is Mine” and “P.Y.T.”; and “For All Time,” a rare unreleased cut from the original Thriller recording sessions, newly mixed and mastered by Michael Jackson.

The deluxe Thriller – 25th Anniversary Edition packaging contains a personal greeting from Michael Jackson to his fans penned exclusively for this special release.