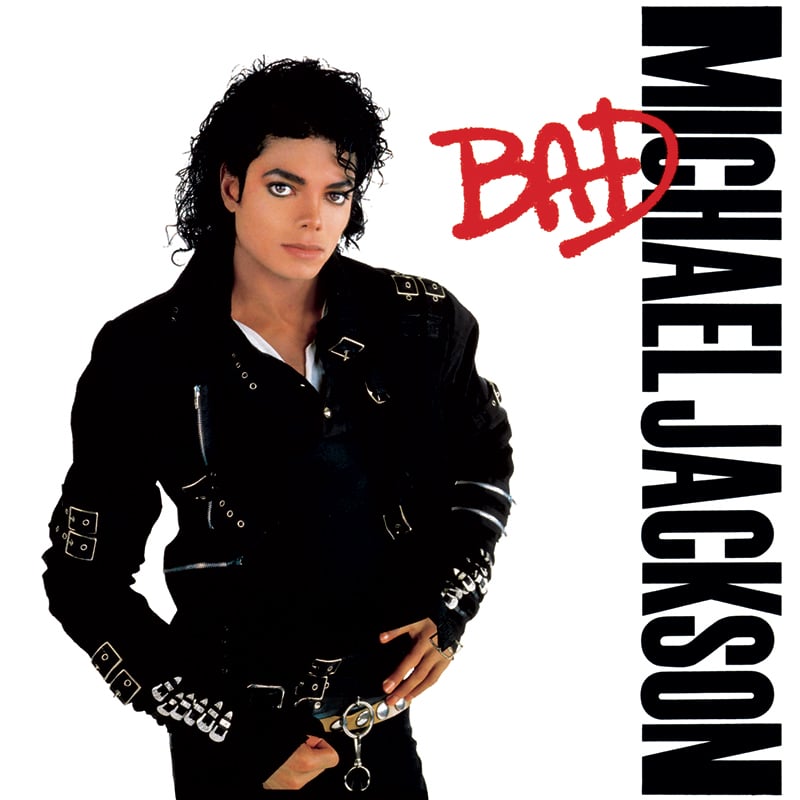 ‘Bad’ is Michael Jackson’s third solo album on Epic Records, released on August 31st, 1987. Nominated for six Grammy Awards (winner of two), and selling an estimated 45 million copies worldwide, it is cited as one of the best-selling albums of all time, and was hailed by Time Magazine as “A state-of-the-art dance record”.

‘Bad’ is the first album in the history of recorded music to have five of its singles consecutively peak at #1 on the Billboard Hot 100 chart: “I Just Can’t Stop Loving You”, “Bad”, “The Way You Make Me Feel”, “Man in the Mirror” and “Dirty Diana” – all charted at #1.

The final 11-song tracklist contained 9 compositions written solely by Michael, and Michael served as co-producer for the album with Quincy Jones, who served as producer. This was the last of Michael’s albums which Quincy worked on.

In all, ‘Bad’ took more than a year to record. The album earned Michael the first-ever Video Vanguard Award at the MTV VMA awards.

Michael Jackson: “For two and a half years, I devoted most of my time to recording the follow-up to ‘Thriller’, the album that came to be titled Bad. Why did it take so long to make Bad? The answer is that Quincy and I decided that this album should be as close to perfect as humanly possible. A perfectionist has to take his time; he shapes and he molds and he sculpts that thing until it’s perfect. He can’t let it go before he’s satisfied; he can’t. We worked on ‘Bad’ for a long time. Years. In the end, it was worth it because we were satisfied with what we had achieved, but it was difficult too. There was a lot of tension because we felt we were competing with ourselves. It’s very hard to create something when you feel like you’re in competition with yourself because no matter how you look at it, people are always going to compare ‘Bad’ to ‘Thriller’….I think I have a slight advantage in all of this because I always do my best work under pressure.” – Michael Jackson, 1988.

Michael Jackson Estate Co-Executor John Branca: “Michael was very involved creatively with ‘Off The Wall’ and ‘Thriller’, but he was even more involved on ‘Bad’. He did write nine of the 11 songs. Michael would create demos in his studio at Hayvenurst. That would be the model for what was on the album. He was the architect of the album in every sense of the word.”.

Keyboardist Greg Phillinganes: “[‘Bad’] was arguably the most transitional point in establishing his musical independence. And the songs speak for themselves. It was just a well-rounded collection of great songs.”

Engineer Bruce Swedien: “It’s interesting to me to reflect on the album ‘Bad’, and realize that I have more favorite songs on this album than any of the others.” Engineer Matt Forger: “When you were with Michael you always had this sense of enjoyment, of energy, and whatever it is Michael wanted to do, he wanted to enjoy himself when he was doing it.

Assistant Engineer Russ Ragsdale: “Everything gets recorded in super duper S T E R E O. At one point, during the making of ‘Bad’, I saw two Mitsubishi 32-track X-850 digital machines, one Studer 24-track, and a one-inch 16-track machine, all synchronized together to play in sync….what an experience.”

Recorded Digitally on the Mitsubishi Multi-track and stereo master recorders.

Quote from “Man In The Mirror”: “If you want to make the world a better place, take a look at yourself and make a change.”

“Our deepest gratitude to the Creator for the tireless efforts of those who generously gave of themselves – creatively, physically and spiritually in the making of this music.” – MJ and Q.J.