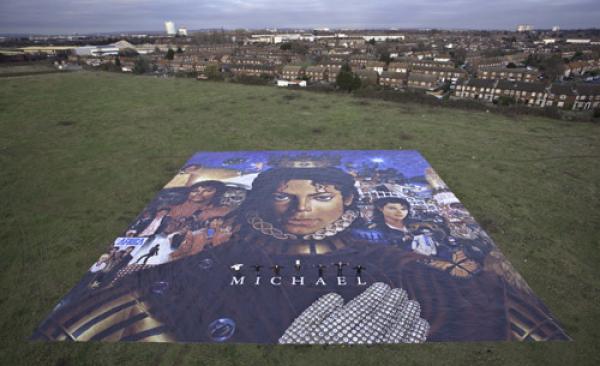 Guinness World Records confirmed that the poster of Michael Jackson’s ‘Michael’ measures 171ft by 170ft with a total surface area of 29,070 ft², smashing the previous record – held by the 2010 Winter Olympics in Vancouver – by more than 110 ft².
To put it into perspective, the ‘Michael’ poster would take over three quarters of the pitch at Wembley stadium, is longer than the equivalent of six Routemaster buses end-to-end and if upright would be higher than Nelson’s column.

The poster, made of PVC and weighing one ton, took engineers three hours to install – and is less than 3,000 meters from one of Heathrow’s main runways, literally viewable by all planes arriving/ departing.

Guinness World Records requires the world’s largest poster to be publically displayed and formed of one single piece of material; it must also advertise a commercially available product. Guinness World Records sent an official adjudicator to the site situated at Rectory Farm in Middlesex to officially verify and measure the ‘Michael’ poster.

Tarika Vara, Guinness World Records adjudicator, said:“This is a massive achievement and it brings me great pleasure to confirm that with this new world record, Michael Jackson’s ‘Michael’ has earned its place in history. This poster has not only achieved incredible scale but it has combined this with intricate detail and having seen it up close I can confirm that the quality of the image is fantastic. Michael Jackson already holds a number of Guinness World Records and we are thrilled to award another title to the King Of Pop.”

The image of the album cover of ‘Michael’ was created by painter Kadir Nelson in 2009. In the original oil painting, Kadir – who is known for story telling through his art – takes us on a journey through some key moments and important people in Michael Jackson’s life. ‘Michael’ is the much-anticipated album of newly completed recordings by the King Of Pop.

The poster will stay at what will be known as ‘Michael’s Field’ until 23rd December, after which, the poster will travel via sea container into continental Europe where it will be toured and displayed.